Years ago, when I was programming in PL/1 on an OS/390 platform, I used some of the breaks for improving my PL/1 programming skills. One day I decided it would be fun to try to get an animated Mandelbrot fractal zoom working on a mainframe terminal. Recently I created a similar project for a Console application, which I will describe in this blog post.

Before we delve into the nitty gritty details of the code, first a small intro into the world of fractals.

In mathematics, Fractals are abstract objects used to describe and simulate naturally occurring objects. Like the natural fern in the title image, artificially created fractals show similar patterns at increasingly small scales. Looking close at the fern leaf, it seems to consist of smaller copies of itself.

One of the most famous is the Mandelbrot set (see the image below), which was named after Benoit Mandelbrot

Images are created by applying the equation to each pixel in an iterative process, using the pixel's position in the image for the number '\(c\)'. '\(c\)' is obtained by mapping the position of the pixel in the image relative to the position of the point on the complex plane.
More iterations per pixel will take longer to process, but yield a fractal pattern with a higher detail. The animation below shows the Mandelbrot set based on a static number of iterations per pixel:

Getting animations to work on a terminal system which requires a server round-trip for each displayed page, is not an easy task; especially when ASCII-characters are the only means of drawing available. In fact, the only way to do it, is to cheat a bit.
The solution was to convert the calculated Mandelbrot output to corresponding ASCII-shades and store them in a file. In this file each X amount of lines provided a full frame of the animation for a terminal window with a height of X rows. Animating was as simple as scrolling through the file page-by-page.

This inspired me to create a similar solution inside a Windows console application.

For a console application, the approach is similar in the sense that we use ASCII-character to represent the shading of the fractal. However, no server round-trip is required and we can output directly to the screen.

The 'pages' are calculated on a row-per-row basis and as soon as a full frame is calculated, the entire buffer is written to the console window for display. After this, the new zoom-factor is determined and the next page is calculated.

In pseudo-code of this main loop is as follows:

The real magic happens when calculating the contents of each row, which can be done in parallel, making the processing time significantly shorter.

In pseudo-code calculating a row looks as follows:

Let's take a look at the code for the main loop. Note that this C# code is not fully optimized in order to keep the code in one single method.

This is pretty straight forward. The most important line to notice, is line 33, where the specific rows is calculated. Let's see what this CalculateRow method looks like.

Copy paste the main-loop and the CalculateRow() method in your own console application and start tweaking the code yourself to see what happens.

If all goes well, the first few frames of your animation should look like this: 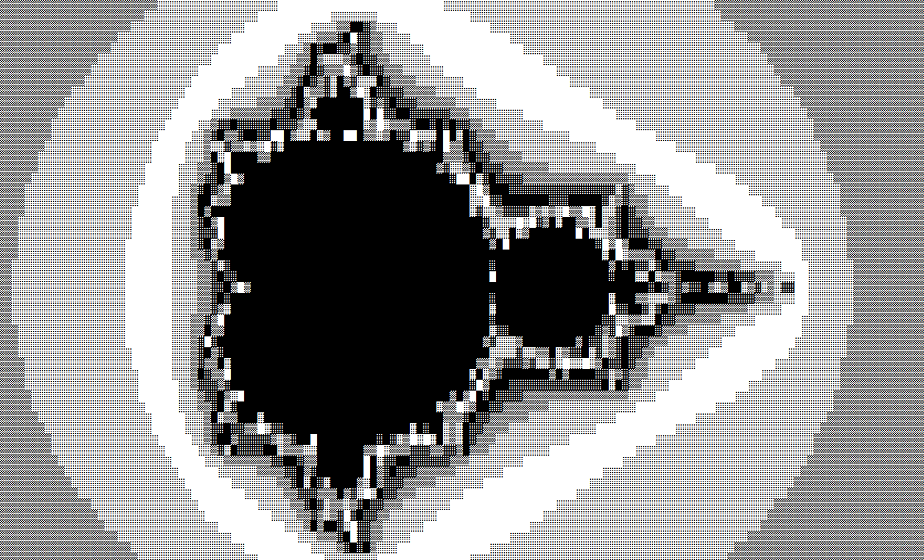 Practicing your programming skills may not always be about writing great code, but rather finding fun challenges and puzzles to conquer. I'm always curious to know which ones other people came up with, so let me know in the comments below!

This article explains how to setup Google Analytics for a website. It mainly focuses on Ghost Pro, but the principles will work for other platforms as well.

Recently I have been exploring Google's API to access their Drive functionality using the .NET 4.5 framework with C#. I'd like to share a few of my findings and maybe help a few people along the way.