The term S.O.L.I.D. stands for five design principles intended to make software designs more understandable, flexible and maintainable. These are a subset of many principles promoted by Robert C. Martin and when combined together, they make it easy for a programmer to develop software that is easy to maintain, extend and refactor, while avoiding code smells. The SOLID principles also form a core philosophy for methodologies such as Agile development or Adaptive Software Development.

Understanding and applying these principles will allow you to write better quality code and therefore be a better developer.

In this article I refrain from using code examples as understanding the principles and their importance is the focus. Also, since these are language independent, I believe the SOLID principles are better explained with simple examples and metaphors than with lengthy code snippets. Next to my own experience, I read quite a few articles and books on OO-principles, but want to say special thanks to /u/CleverNameAndNumbers (Reddit) for the simple examples.

In short, the five S.O.L.I.D. principles are the following.

These will be described in detail in the next chapters.

The Single Responsibility Principle (SRP) states that a class should have only one reason to change.

Every module or class should have responsibility over a single part of the functionality provided by the software, and that responsibility should be entirely encapsulated by the class. 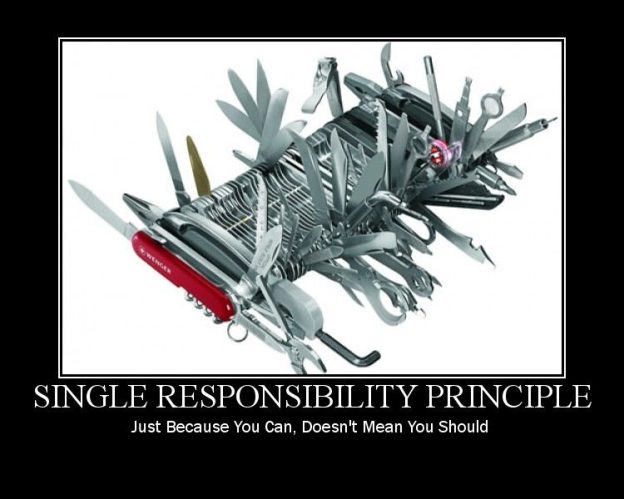 The Single responsibility principle is closely related to the concepts of coupling and cohesion.

Coupling refers to how related or dependent two classes or modules are towards each other. For low coupled classes, a major change in one class has a low impact on the other. High coupling in a system makes it difficult to maintain since a change in one class will have impact on other classes as well. This could result in one change flowing through a system as an oil slick, sometimes even requiring a full overhaul to fully implement.

In software, some examples of responsibilities that may need to be separated are the following:

The Open-Closed Principle (OCP) states that software entities (classes, modules, methods, etc.) should be open for extension, but closed for modification.

In practice, this means that when you write a class, a function or library you should do it in such a way that anyone else can easily build on to it, but not change its core elements. 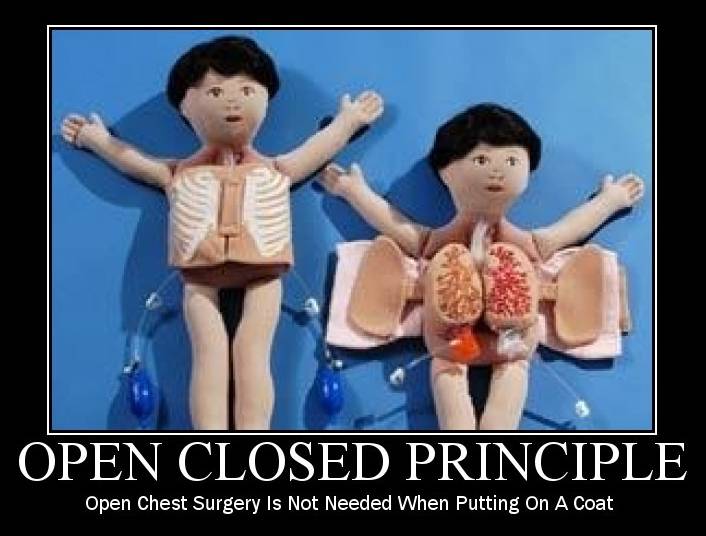 A very simple example of this concept would be an old photo camera that does not allow changing of lenses. It is not open for extension and thus violates the OCP. Most modern SLR cameras have interchangeable lenses and by that extending the functionality to achieve different photographic results with different lenses. Moreover, changing a lens does not modify the camera's basic functionality to take photo's.

The Open-Closed principle can be achieved in many other ways like through inheritance, or via behavioral design patterns like the Strategy design pattern.

The Liskov Substitution Principle (LSP), developed by Barbara Liskov, states that subtypes must be substitutable for their base types.

In other words, suppose object S is a subtype of object T, then objects of type T may be replaced with objects of type S without altering any of the desirable properties of T. 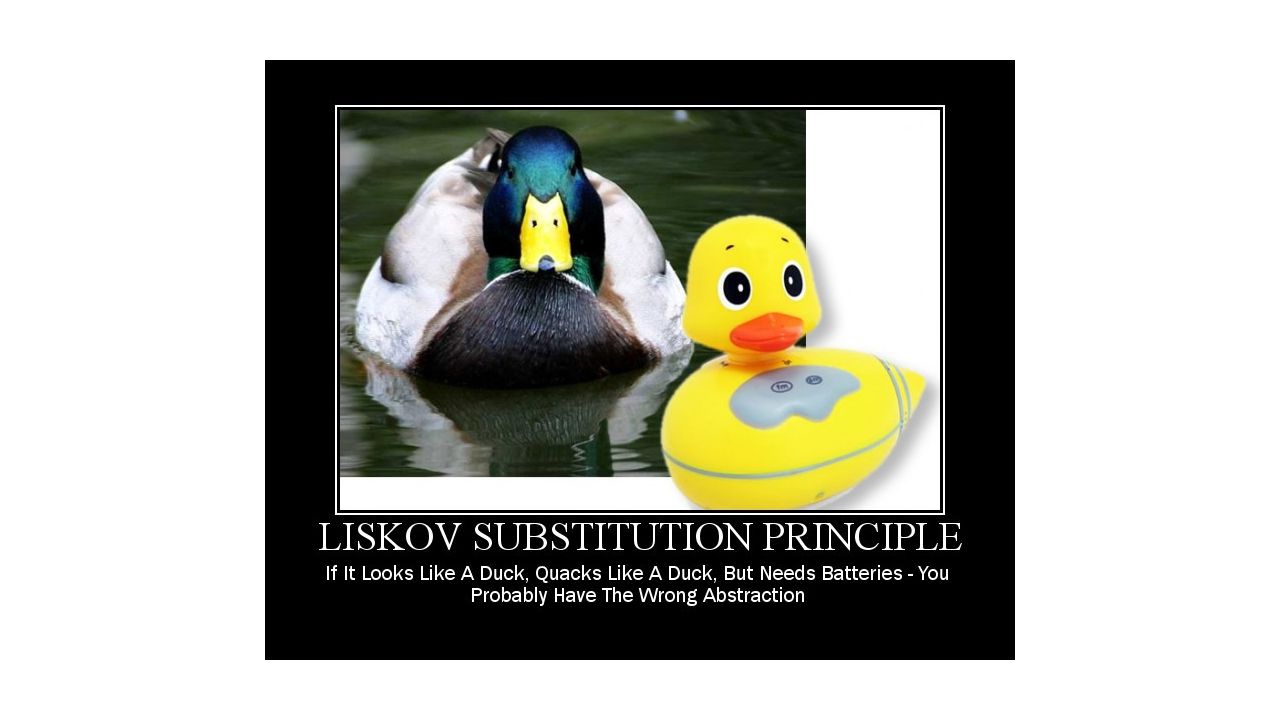 When this Liskov substitution principle is violated, it tends to result in a lot of extra conditional logic scattered throughout the application. This duplicate, scattered code becomes a breeding ground for bugs as the application grows. A common code smell that is often an indication of a LSP violation is the presence of type checking code within a code block that should be polymorphic.

The Interface Segregation Principle (ISP) states that clients should not be forced to depend on methods that they do not use.

In short: only make the user implement whichever methods they intent to use. This problem is commonly found in interfaces. An interface is a collection of functions that have a name and defined input and output parameters, but no implementation. A class implementing this interface needs to implement all functions in the interface.

If you only intend to use a handful of relevant functions, but there are 20 others in the interface, there would be 20 functions in your class doing nothing. Instead, it is better to split up the interface in its most relevant groups.

Suppose you're a car mechanic who only offers two services: a complete overhaul of the car from top to bottom, or nothing at all. Nobody would come to your shop. Instead, you should offer an oil change package, a tire replacement package, brake checkup package, etc. 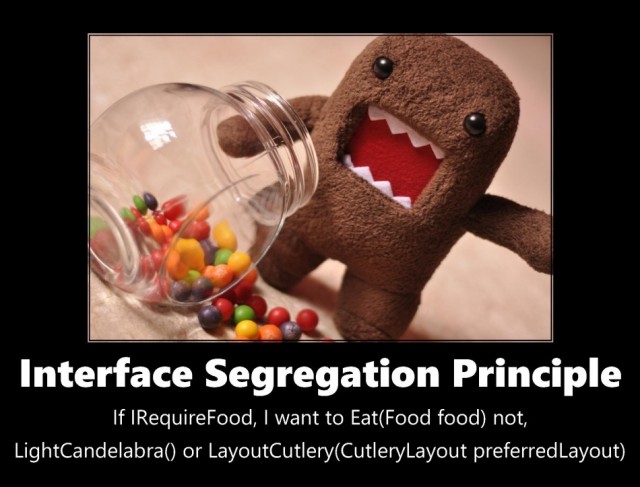 Usually this is achieved by using an interface between the high- and low-levels. A high level module can call the same function on all low level modules, knowing that the input and output will always be of the expected type. The low level reports to the interface using the same logic. 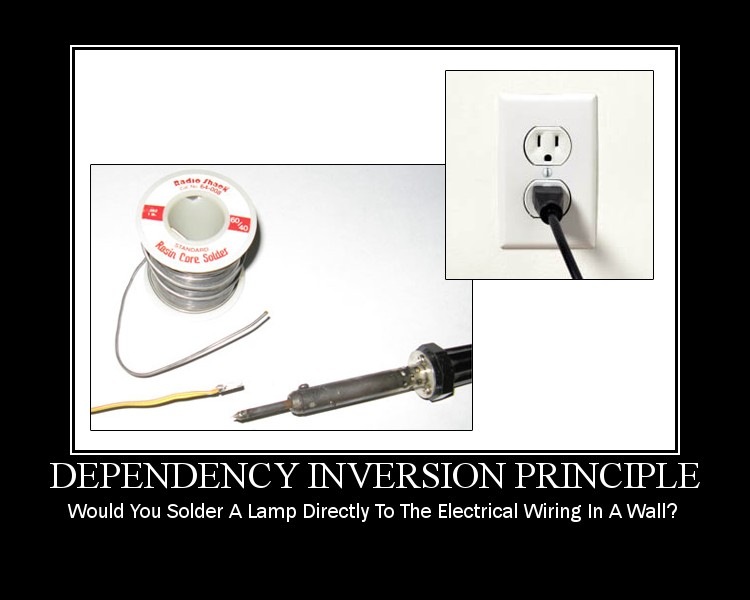 Suppose you're working at a company as a manager. The company has many employees and there are many things that need to be done. The employees don't only work for you, but have other managers to report to. Instead of teaching them how to write their report specifically for you, you should teach them the basic principles of that report and do the formalization yourself.

From an employees perspective, it would be overwhelming to memorize the reporting preferences of every manager. It would be much easier if they can just write a generic report with a certain set of data that's suitable for every manager.
The generic report process is the interface between manager and employee. All that you require as a manager is the data, since you know what the output should look like.

By doing this, you as a manager aren't reliant on having your employees giving their reports in a very specific fashion (you'd have to proof read anyway). You can simply give your employees the data they need. If those employees have to give that report to anyone else, they won't be confused by the specific content you put on yours.
As an employee, this allows you to work for multiple managers using only a simple set of rules, rather than memorizing a huge stack of little details for each manager.

In general, software should be written as simply as possible in order to produce the desired result. Once updating the software becomes painful, its design should be adjusted to remove the pain (Pain driven development). These five SOLID principles, in addition to the more general Don’t Repeat Yourself (DRY) principle, can be used as a guide while refactoring the software into a better design.

How does the TCP 3-way handshake work and how is it used to perform a port scan?

This article describes a quick and easy way to have cookie stealing functionality for your XSS tests, by using Google Forms as a host.