This article will cover the process, techniques and code required to automatically resolve an embedded library in C# and inject a module initializer into the compiled assembly using IL weaving.

A technical blog post indeed, but the terms and concepts will be explained in depth so by the end of this read, you'll be weaving assemblies like a spider.

Say you have a utilities library that contains custom helper classes, extensions, native methods and general utility classes to support your application. That library might require functionality from other, third-party libraries to perform its tricks. For example, in your library you may have a custom compression wrapper that references a third-party library for its compression algorithm (like SharpZipLib or Protobuf-Net). Another example is a class for manipulating firewall rules that requires a .dll that may not always present on the Windows OSs you need to deploy to (yes, I'm looking at you NetFwTypeLib.dll!)

One solution to tackle this, is to deploy these third-party dependencies along with your application. However, this is not always an option and would require a change in the deployment process to facilitate every change in your library's dependencies. Moreover, you may end up dragging along a Christmas tree of third-party libraries. An alternative would be to encapsulate the third-party library file as part of the compiled utilities assembly and unpack this embedded resource when it's needed at runtime. This sounds like a great idea!

So how would this unpack mechanism work? Would each utilities class with a third-party dependency require an 'Initialize'-method to unpack it? That would work, but is unfriendly to the caller who would require an extra method call to achieve what he wants. Adding a static constructor for each class to unpack dependencies before any calls are made, might work as well, but it would be better and more generic to let the .NET runtime figure it all out with a little help.

From C# to native machine code

In order to fully understand the basic components involved in what we're trying to achieve, let's go through the process of converting C# code into native machine code.
The image below depicts, on a high-level, how the contents of a C# project are compiled and handled by the .NET Framework at runtime. 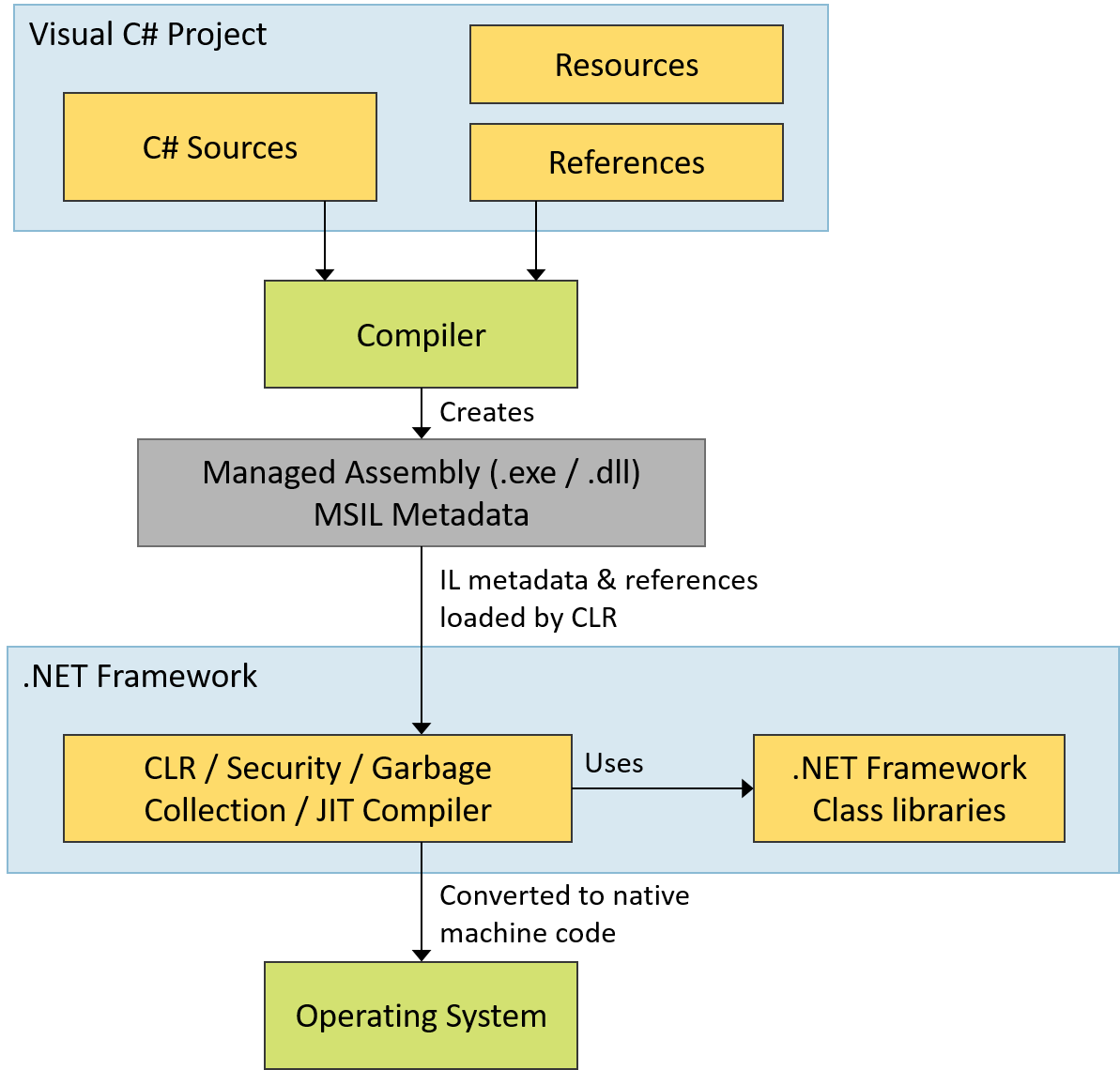 The compiler grabs all C# source files, resources and references and compiles it into Microsoft Intermediate Language (MSIL or IL). MSIL is code that is independent of hardware and the operating system. This compilation process results in a Managed Assembly (.exe or .dll file).

An assembly is called 'managed' because it is managed by the Common Language Runtime (CLR or .NET runtime) when it is executed. The CLR uses the .NET Framework Class Libraries (FCL) and Just-in-Time (JIT) compiler to convert it to machine code that is specific, or native, for the Operating system it's running on. Of course, much more is involved, but this is the process in a nutshell just big enough to contain this nut.

The following chapters go into the details for each step required to create a module initializer to resolve embedded assemblies:

Note that all code and the full proof of concept can be downloaded from my GitHub project.

1. Embedding a resource into an assembly

The preparation for the embedding of a resource, is done in the Visual C# Project, while the actual embedment is executed by the compiler. After embedding a resource into the Managed Assembly, the .dll or .exe will be a little bigger in size. In this step, we want to embed an assembly in order to be able to resolve it at runtime later.

To add a .dll to your project as an embedded resource, follow the steps below:

For my 'Coen.Utilities' project, I added the 'SharpZipLib.dll' and placed it inside a folder called 'Embedded': 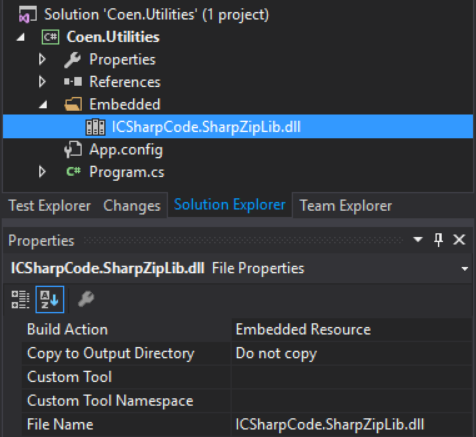 Compile the project and notice the output assembly file's size has increased as it now contains the included file as well. You can also use ildasm.exe (MSIL Disassembler, shipped with Visual Studio) to check the Manifest of your assembly.
My 'Coen.Utilities' increased by 200.704 bytes after embedding the SharpZipLib.dll. The manifest below shows it's indeed part of my assembly and it has a length of 0x00031000, which is 200.704 in decimal.

Resolving of assemblies is done by the CLR at runtime, which is nothing more than finding the required assemblies when they're needed. Whenever the CLR cannot find an assembly in its usual probing paths, an AssemblyResolve event will be invoked. By handling this event, the application can help the CLR locate and load an assembly, its specific version from exotic places like network locations or ... from an embedded resource.

Before we get into resolving embedded assemblies, let's see how a straight-forward runtime assembly resolving is done by .NET via the System.AppDomain.AssemblyResolve event.

Consider the following code, which is simplified for the purpose of explaining the mechanism:

So far so good, now the embedded part.

As described in the previous chapter, in order to get the resolving of embedded assemblies working, we need to subscribe to the AssemblyResolve event that is invoked by the appdomain of the current thread (System.AppDomain.CurrentDomain).

The mechanism for resolving an embedded resource differs only in the way the Assembly is loaded. Consider the extended version of the CurrentDomainAssemblyResolve method from the previous chapter:

Note again that this code snippet is simplified for explanation purposes. If you make your own AssemblyResolve handler, make sure to do proper exception handling.

The best time to subscribe to this event, is as soon as possible, before any other calls are made. Doing this manually by forcing the user to call an 'Initialize'-method before he can use the assembly or a specific class, is not so user-friendly. It is better to subscribe to the AssemblyResolve event as soon as the assembly containing the embedded resource is loaded; using the module initializer described in the next chapter.

Which library to use?

So, there are a few ways to create a module initializer. One way is to use Fody, the IL weaving library by Simon Cropp. This is a great library and definitely worth checking out.
However, for fun and to learn more about this technique, we're going a little deeper and do it ourselves. For this we use the Mono.Cecil library, which is actually used by Fody as well.

Cecil is an awesome project written by Jb Evain to generate and inspect programs and libraries in the ECMA CIL format. With Cecil, it is possible to load existing managed assemblies, browse all the contained types, modify them on the fly and save the modified assembly back to the disk ... Which is exactly what we need.

For the assembly containing the embedded resource we are going to create an internal class called ModuleInitializer, which will contain a public method called Initialize(). This Initialize-method subscribes to the AssemblyResolve event:

Nothing fancy here. Note that in this code snippet, the ModuleInitializer class is internal, so it cannot be called from outside the assembly. We don't want any other calls made to this class other than our module initializer. Another important thing to note is that the public Initialize()-method is static and has no parameters. This is a requirement for using this technique and will be explained further on.

The trick comprises of a few steps:

Since injecting the module initializer into the assembly must be done in the MSIL, obviously this process needs to be a post-build step. I created a console application for this, so I can easily add it as a post-build event for any assembly I want to use this technique for.

Let's check out the code that makes this all happen. It consists of a public main Inject()-method calling other private methods that will be described further on.

When explaining the code, I will leave out any boiler-plate code required for this console application to work. If you want to check it out in its full glory, check out my GitHub project.

Consider the following code of the method that will be the main entry for the console application after command line arguments have been parsed:

This is the main structure of the Inject method. In the following paragraphs, each of the important calls will be further explained:

The ReadInjectionTargetAssembly-method reads the assembly in which the constructor should be injected. It also reads the Program Database (.pdb) file, if it could be located, in order to restructure its contents with respect to the changes made to the assembly after injecting the constructor.

After the target assembly was read, the GetModuleInitializerMethod is called, which locates the 'Initialize' method that should be called by the injected constructor. After it has been located, some validation is done to ensure the call to this method can actually be made.

Note that in the following snippet the className and methodName are provided as parameters. In my proof of concept, I retrieved these via command line parameters of the injector program. They correspond with the classname/methodname of the target assembly's module initializer class and method as defined in the previous subchapter The Trick.

Now the assembly is read and the method is located that should be called by the constructor, we're ready to modify the assembly.

This method is where the magic happens.

All this above is still done in memory; nothing has been changed to the assembly yet. This is what the last method in this sequence is for.

The WriteAssembly method saves the changes to the assembly and modifies the .pdb file with respect to these changes. It is quite similar to the ReadInjectionTargetAssembly method we defined before.

All of the code in this article can be found in my GitHub project. It contains 3 solutions in 2 projects:

This may not be a solution to an everyday problem. However, I found it very useful and, once in place, a very elegant way to handle this problem. Credits to Einar Egilsson on who's work this code was built. Moreover, IL weaving is an interesting technique and Mono.Cecil a powerful library that can be used to do much more than just create module initializers.

How to create sticky posts for your Ghost website? Using the Casper theme as example, but the details are valid for other themes as well.

This article will discuss the Prism.js library and actions I took to get syntax coloring, and line numbers to work for code snippets on my Ghost Pro blog.

Coen Goedegebure
—
Creating a module initializer in .NET
Share this