Why is it important to understand Big-O notation? Before we can answer that, let's start out with a little background about efficiency, performance and complexity of algorithms.

Efficiency of an algorithm covers lots of resources, including:

All are important but we will mostly talk about time complexity (CPU usage). In this context, it is important to differentiate between:

Complexity affects performance but not the other way around.

Since Big-O notation tells you the complexity of an algorithm in terms of the size of its input, it is essential to understand Big-O if you want to know how algorithms will scale.

The Big-O notation itself will not help you. Rather, understanding Big-O notation will help you understand the worst-case complexity of an algorithm. Essentially, Big-O gives you a high-level sense of which algorithms are fast, which are slow and what the tradeoffs are.

Consider a magical, but inefficient and heavy, traditional paper phone book in which each page contains the details of only one person. We want to find the page on which a person's details are written. There are several methods (algorithms) of doing this. We will analyse the following two algorithms as an introductory example:

Let the number of people in the phone book be \(n\). The number of operations for the algorithm in the first example increases by 1 for every person added to the phone book. This means that worst-case we would need to browse through \(n\) (all) entries to find our match. This classifies this algorithm as linear, or in Big-O notation as \(O(n)\); we state this algorithm has an order of n.

The second algorithm uses a binary search approach to find a match: with each operation we halve the problem space. This means that each time we double the amount of pages in the phone book, the amount of operations to find our match increases by 1. This classifies this algorithm as logarithmic, or in Big-O notation as \(O(log\ n)\); we would say this algorithm has an order of log n.

Note that when evaluating complexity of algorithms, constants are not taken into account because they do not significantly affect the number of operations (when \(n\) gets really big). An algorithm which does \(n\) steps and algorithms which do \(2n\) or \(n/3\) respectively are still considered linear (\(O(n)\)) and approximately equally efficient.

Now let's take a look at a few other examples of the Big-O notation.

A number of very common order of magnitude functions will come up over and over as you study algorithms. These are shown in the following list and will be covered in this article:

Before diving into details of each classification, let's see how these categories perform relatively when their input gets really large.

The chart below depicts the Big-O complexities mentioned above and the number of elements in the input against the number of operations. The color coding provides a rough judgement on their performance.

The table below shows just how big of a difference the number of computations between these algorithms are for 10, 100 and 1000 input elements:

Bonus trivia: It takes Siri almost 13 minutes to pronounce the numbers in 1000!

\(O(1)\) describes an algorithm that will always execute in the same (constant) time (or space), regardless of the size of the input data set.

An example is the code that returns whether a number is even or odd, like in the following C# code:

Algorithms with an order of log n generally reduce the problem size with each operation. The most common attributes of these algorithms are that:

In the introductory example, the second algorithm repeatedly splits the (remaining) pages of the phone book in two halves. Depending on the half in which the target person is in, one half is chosen and the other half discarded.

An example of a snippet of C# code with an order of log n is the following:

\(O(n)\) describes an algorithm whose performance will grow linearly and in direct proportion to the size of the input data set. In the introductory example, the first algorithm required looping through every single entry of a phone book until the match was found, thus having an order of n.

The following example in C# also has an order of n and loops through a list of elements until a given value is found:

Other examples of linear algorithms are:

Most efficient sort algorithms fall under this category, like Merge Sort, Heap Sort and Quick Sort. Another example of a \(O(n\ log\ n)\) algorithm is the Fast Fourier Transform.

\(O(n^2)\) describes an algorithm whose performance will grow linearly and in direct proportion to the size of the input data set squared.

Where a linear (\(O(n)\)) example would be a loop through all n elements of a list, a quadratic example is a double nested loop. More practical, most inefficient sort algorithms fall under this category, like Selection sort, Insertion sort and Bubble sort, as we will see below.

The Bubble sort algorithm repeatedly iterates the input container to be sorted, compares each pair of adjacent items and swaps them if they are in the wrong order. It continues to do so until no swaps were made, indicating that the list is sorted. By doing this, the bigger items 'bubble' up, hence the name 'Bubble sort'. See the animation below for an example.

The following code is an implementation of the Bubble sort algorithm in C#:

The outside 'do - while' loop (line 4 - 17) worst case makes n passes for an input in which the elements are in reverse sort order, making this loop do \(O(n)\) work.
The inner 'for'-loop (line 7 - 16) also runs in order of n. n - 1 to be precise, however we discard the constant because it is less significant when n gets really big (see the notes in the introductory example).

Note: Any algorithm that has a complexity of \(O(n^a)\), with \(a\) is a non-negative integer, is said to have polynomial complexity or is solvable in polynomial time.

\(O(2^n)\) complexity is an algorithm whose growth doubles with each additon to the input data set. With small inputs the growth curve is very small, but it rises exponentially when the input gets larger.

An example of an exponential algorithm is the recursive calculation of the n-th Fibonacci number, like in the C# example below:

One famous problem in Computer Science is the Traveling Salesman Problem (TSP). In this problem there are n cities. Each of these cities is linked to 1 or more other cities by a road of a certain distance. The TSP is to find the shortest tour that visits every city.

Consider the scenario in which we have 3 cities A, B and C. These are the possible combinations with roads connecting all cities and returning to the starting-point:

When we take a closer look at these results, all possibilities are the same route with a different starting point or in reverse. So, when we remove equivalent routes we end up with 1 unique route for an input of 3 cities: 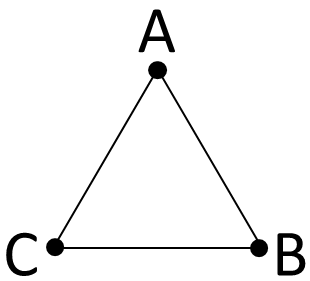 These results are a mathematical function called factorial, which outputs as shown below:

The complexity of the Traveling Salesman Problem is \(O(n!)\).

It can be very useful for readers to know how much time they can expect to spend on an article before they engage. That's why I decided to add an estimated reading time to my blog. It will take approximately 3 minutes to read this article and find out how I implemented that.